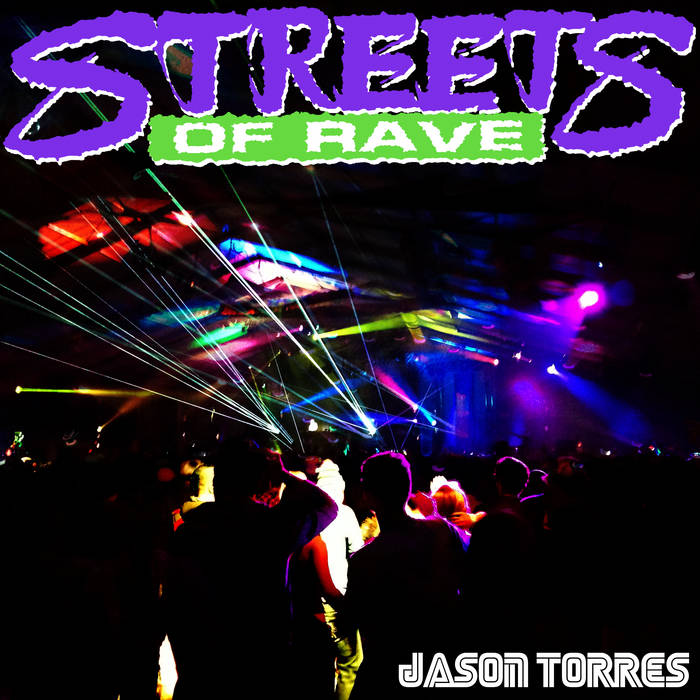 Jason Torres - ex-sonic enforcer, the solution to aural pollution. The city’s a war zone, and he’s going out alone to give the 1% a kick in the subs.

This is the ultimate in street raving. Torres is a dance music maniac armed with a battery of 6 (7?) different sonic attacks - including “Manifest0”, “This Means (Space) War”, and “Power of Love”. He’s up against a mob of corporate creeps and tax dodging fiends.

On the streets it’s only him against hordes of attack ads and disinformation. Jam their influence by playing these as loud as you can. Throw some shapes or twerk it, these tracks will just keep comin’.

Welcome to the Streets of Rave.

On this outing Torres takes out all the stops, crystallizing his array of musical interests into a 6 (7?) song preview of things to come. Honing and focusing his post-rave sound, Torres delivers a barrage of classic breakbeats and samples submerged in a sea of subsonic bass.

Reflecting on the arc of rave history, from the euphoric utopia to the dark side that followed, Streets of Rave shows Torres at both ends of the rave spectrum: His most optimistic track yet, peak bliss piano house anthem “Power of Love”, oozes that ’91 feeling of hope and positivity, while “Fuck With Nobody” has Torres directly confronting his issues with isolation and loneliness, twisting an interview sample from rapper Logic into a footwork jungle diary entry written with breakbeats on 808 weight paper.

The record collects an overwhelming set of influences from classic jungle, UK hardcore, footwork, house and even ambient and video game music. Torres says this is intentional and echoes the FOMO and distraction prone state the world is currently in,

“I have always thought that Brave New World got it right when it spoke about the dangers of distraction in the modern world. Things like 24/7 news channels and endless scrolling social media sites feed parts of our brain a cocktail of pleasure and pain that are extremely addictive and detrimental in the long term. I say detrimental not just in the anxiety inducing aspect of information overload, but also in that one’s time on Earth, one’s attention is taken away at that moment, from let’s say, wondering why their corporate boss makes 10 times more than they do? This record is a glimpse into the tempest that is my mind. A series of chaotic waves crashing from all directions, one wave reaching it’s crest is instantly blindsided by it’s neighbor, who then destroys himself and all around him. A lifetime of musical influences and yearnings screaming to get out of their crowded prison, and into your ears.”

Music from the bottom of the ocean.